Of all the things that were announced at Apple’s WWDC, the new iOS 11 drag and drop features have particularly caught our eye.

The main premise of drag and drop is nothing new. You’ve probably already used this feature yourself to organise your applications into folders on your iOS devices. However what’s new, is that you can now select multiple items at once rather than being restricted to one item at a time; and you’re no longer confined to moving them into neighbouring locations.

How Does iOS 11 Drag and Drop Work?

The iOS 11 Drag and Drop lets you pin a stack of items to your finger from different locations across your device and drop them all into one destination of your choice. For example, you can collect all of your lifestyle apps together and drop them into a new folder all at once. Not only do these features work across different locations on your device, but simultaneously between apps too; and this is what got us excited. This could potentially pave way to novel ways apps can exchange information on the iPad. Here’s what our iOS Developer had to say when we asked him a few questions… 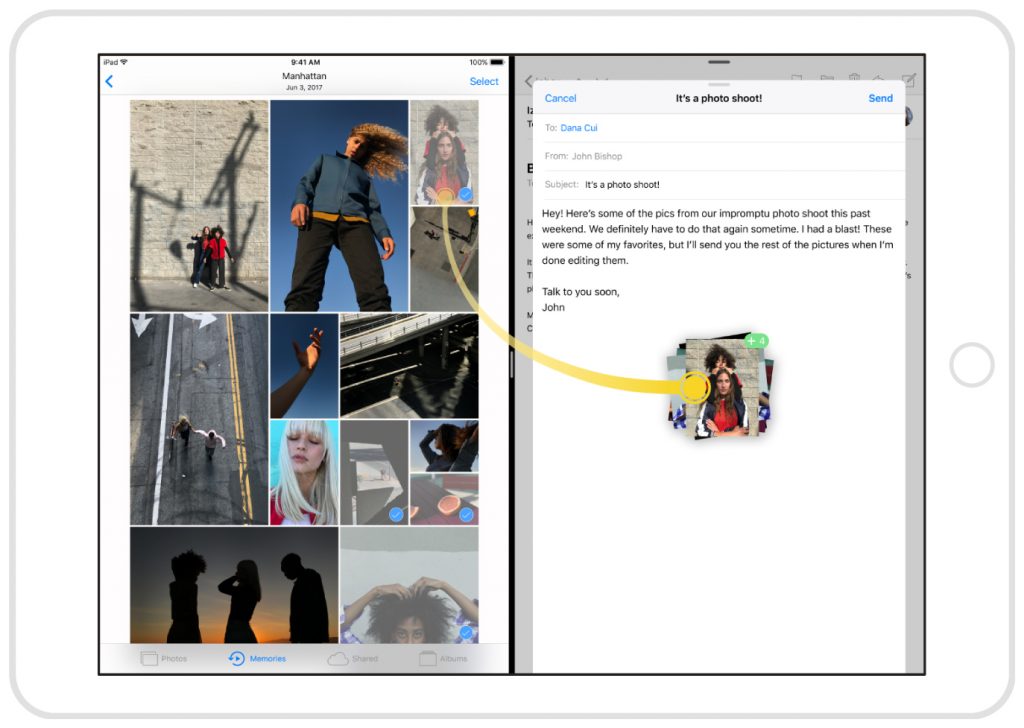 Why is this so exciting?

The new drag and drop features are currently limited to iPad due to its larger screen size and split-view function. However, there is potential for it to be featured on the iPhone too. Either way, the new drag and drop in iOS 11 completely changes the way data can be moved around. For example, you can drag a location out of Maps and drop a representation of it in another app i.e. as an embedded interactive map in notes or other app which supports that. Whereas dropping in a Word doc app destined for printing would leave you with only the thumbnail image. Alternatively, you could drop the text representation (address) of it into an app supporting only plain-text.

What Are The Possibilities?

Apple have made it easy for developers to integrate the new drag and drop feature into new apps. They’ve provided an API for both the backend and front-end development with the system handling security aspects. Going further, we could be looking at extended opportunities for ways apps can exchange information. Taking advantage of these APIs, perhaps you could drag an item from one app destination to another to extract only part of it. For example, dragging a video file from an editing app and dropping it into an audio app to extract only the audio.

The user never has to worry about the powerful goings on behind the scenes. They just see a pretty collection of items attached to their finger while they move around deciding where to drop them. This will be *the* feature, if any, that sees the iPad used as a primary computer for content creation.

Pretty cool huh? And very exciting for future software and application development we do using iOS 11.